What is the Best Yoga Mat in the World? 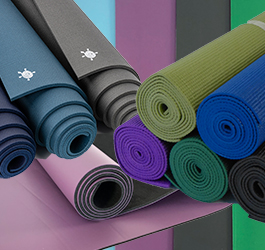 Does which yoga mat you use really matter?
by Peter Harley

Some years ago I saw a film of B. K. S. Iyengar doing a yoga demonstration. Filmed in the 1970s for television, the demonstration was breathtaking. I was completely mesmerised by his amazing focus and skill when I suddenly became aware that he wasn’t using a mat! He was demonstrating on a carpet.

Later when I studied at the Iyengar Institute in Pune we were often told to put our mats away and do much of our practice on the smooth stone floor. I preface this article by cautioning- don't get too distracted by the mat issue, there are much bigger challenges to confront when developing a yoga practice.

So what is "The best yoga mat" for the aspiring yoga practitioner? Not many in the high octane world of hot/power/vinyasa/acrobatic yoga will be satisfied with carpet.

Old School
My journey in yoga began in the 1980s.  At the time the most common mat found at yoga studios in my town were solid black rubber. They weren't natural rubber but butyl rubber a synthetic rubber. These mats were smelly when new and a little less smelly when old. They were a few millimetres thick, black and hard offering little cushioning but reasonable grip when dry. These old rubber mats were industrial in look and strength, almost indestructible. We did our yoga on them and were happy enough until we glimpsed the next generation of mats which began to appear in the 90s.

Revolution
The next generation were the so-called "sticky mats". These revolutionary new mats were made of the synthetic polymer (PVC).  Typically 3 or 4mm thick they had a closed-cell expanded foam structure with a non stretch reinforcing fabric embedded inside.   In the beginning they were European made and expensive but over the years with production in East Asia the price has fallen dramatically. They were a great step forward and remain probably the most popular mat on the market to this day.

The main advantages of the thin PVC mat are that they are much lighter (around 1kg); they're easy to roll up and transport; they look good in funky colours; they have good grip especially once they have been "broken in"; and they are cheap to buy. Iyogaprop's “Easy Grip” mat are a good example of these.

The drawbacks are that they wear more quickly than heavier mats; don't offer much cushioning on hard surfaces; and pucker and "walk" on carpet. Some also regard PVC as being environmentally problematic although I think this is somewhat overstated, a topic that I will address in a future post.

Soon after the thin PVC mat arrived we saw the first heavy PVC mats. Although similar to the thin mats, the heavier mats were 6-7mm thick and made of a denser foam.  They offered more cushioning and were less liable to move on carpet. They have similar grip to the thin mats (again after a bit of use).

They are much longer-lasting than the thin mats and have become the staple of many yoga studios. Their main downside is that they are heavier to carry (around 2.5kg) although they can still be rolled up.  See Iyogaprop's Studio Mat here for prices of these mats.

Both the light and heavy PVC mats remain the workhorse of the yoga world. The are relatively inexpensive so they remove the cost obstacle to anyone contemplating a home practice.

Yoga Fashion
Since then as the business of yoga and especially yoga mats has expanded there have been many new products emerge.  We have also seen the emergence of brand names and sophisticated marketing selling us the idea of improved yoga practice (and of course sexier bodies) with ever more exotic and expensive mats.

Their disadvantages are they tend to wear quickly; some skin types slip on them; some people are allergic to latex; and they’re expensive.

A number of rubber mats have emerged over the years.  The most popular these days appears to be the American “Jade” retailing for around $90.  As with many brand named and marketed products, much of the price is in the name you buy.  There are many more cost-effective alternatives such as Iyogaprop's Emerald mat at around half the Jade mat price. To their credit Jade claim to plant a tree for every mat they sell.

TPE
The “eco” label gets thrown around pretty widely in this space and one of the mats for which this moniker that has been (mis)used is the TPE mat.

TPE is a synthetic rubber made from petroleum through an industrial chemical process just like PVC.

Its main claim to “eco” fame is that it is biodegradable. It rots in landfill.

Fortunately it is nothing like butyl rubber. Like the PVC mats it is an expanded foam with reinforcing mesh.

TPE mats are relatively popular.  Marketed as “eco” by some of the big sportswear companies, they are light and offer good grip for most skin types. They are relatively expensive.  Iyogaprops no longer stocks TPE mats as we found they wear very quickly, thus negating any attempts at sustainability (you can read more about this is another blog on environmental yoga props)

There are many other formulations used in mats, I have attempted to cover the main contenders here. There are also many manufacturers, suppliers and brand names.  Best idea is to find a supplier who has reasonable yoga credentials and experience, listen to their advice and try their product. Avoid fashion statements. Find a good modest mat that will serve you for years.

4.        For a mat that is designed to last a lifetime excellent for home or studio practice try the high quality Kurma Range

What is your yoga mat experience? 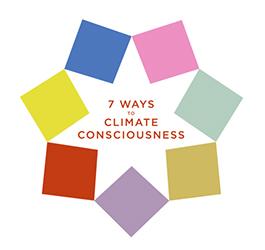 Yoga and the Climate Emergency

The Whale in the Room

How to Use a Yoga Chair - General 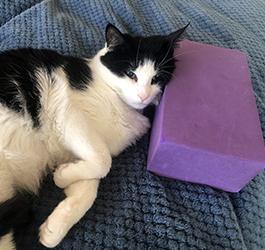 Keeping Up Your Practice In The Winter Season